Zonal Remote Supervision is a continuation patent of Zonal’s original 2012 geo-fenced zone mobile app patent. Zonal Systems has developed, patented and beta tested the use of geo-fenced checkpoints in the security guard business for four years. The IP applies to geo-fenced supervision of maintenance personnel, employees and contractors.

Zonal’s approach is superior to the geofencing used daily by thousands of security guards in the US. Unlike existing tracking systems, Zonal’s patented approach enable sub-zones to be created so that an area perimeter can be zoned, a building within a campus, buildings within a property perimeter zoned and sections within buildings zoned – cumulatively, without loss of presence in any of the zone layers.

Zonal’s indoor micro-zones can be used to replace NFC readers and QR codes at checkpoints, on gates, on equipment, etc. Zonal’s security IP also applies to machines – including robotic maintenance and guards.

Zonal’s patented IP will be able to increase the zoned boundary resolution to below a meter. Meaning micro-zoned checkpoints can be set up indoors at gates, doors, equipment, desks, etc. High Definition Zones Summary.

In beta testing, zones have been created and monitored daily in remote locations and urban settings.  The security supervisor creates the geo-fenced zone on a PC, using Zonal’s patented system. A tour is set up of various zones and the security officer conducts the tour, with checkpoints located in each geo-fenced zone. The system records when the officer entered the zone, which checkpoints were hit, and when they left the zone – typically the perimeter of a building or equipment yard. Geo-fenced zones can be set up to exclude (prohibit) access. The hardware cost is a PC and smart devices. The same patented zoning system that applies to guards can be utilized by robots. 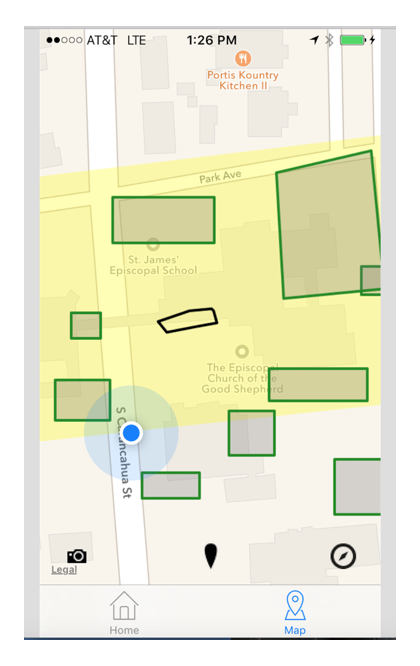 The same geo-fence security zone IP and phone app can be used for service contractors and maintenance crews at remote job sites or anywhere a “virtual time clock” is needed in a geo-enclosed area. Please contact us for a demonstration on your mobile phone.